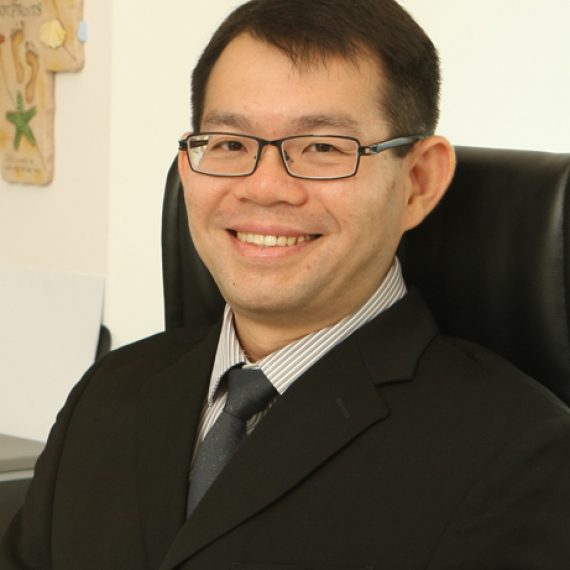 Dr Chew is a specialist in Respiratory Medicine, Intensive Care Medicine and Emergency Medicine with special interests in bronchoscopy, non-invasive ventilation and intensive care medicine. He is also a visiting consultant to Singapore General Hospital, Mt. Alvernia Hospital and an Adj Asst Professor at Duke-NUS Graduate Medical School as well as Senior Clinical Lecturer with the Yong Loo Lin School of Medicine at NUS.
Website:
www.respmed-associates.sg/dr-chew-huk-chin/

Dr Chew Huck Chin is currently a consultant respiratory physician and intensivist at Mount Elizabeth Novena Hospital. Prior to this, he was a consultant at the Department of Respiratory and Critical Care Medicine, Singapore General Hospital.

Dr Chew graduated from the National University of Singapore in 1999. He then obtained the Master of Medicine (Emergency Medicine ) and the MRCS(Edin) in 2003. He underwent specialty training in Emergency Medicine at Singapore General Hospital. Following this, he further obtained the Master of Medicine (Internal Medicine) and the MRCP(UK) in 2004 and underwent a second dual specialty training in Respiratory Medicine as well as Intensive Care Medicine at Singapore General Hospital. He was awarded the European Diploma in Intensive Care in 2009.

Dr Chew has been involved in numerous committees including treasurer and executive committee member for the Society of Emergency Medicine, Singapore 2004-2006 and treasurer for the Society of Intensive Care Medicine, Singapore, SgANZICS conference 2012-2013. In addition, he was also appointed to the Sengkang General Hospital Pro-Tem Committee as well as Clinical Service Planning Committee 2011 – 2013. He has been the supervisor to the Respiratory Therapy Department, Singapore General Hospital from 2012-2013, and has a keen interest in the advancing technology of non-invasive ventilation.

With his dual appointments as both Adjunct Assistant Professor of Medicine at the Duke-NUS Graduate Medical School and Clinical Senior Lecturer with the Yong Loo Lin School of Medicine at NUS, Dr Chew pursued his interest in education and was awarded Outstanding Educator for Critical Care by Duke-NUS in 2012. He has participated in conducting several courses in the field of Critical Care Ultrasound, Mechanical Ventilatory Support, Critical Care Simulation as well as being part of the organizing committee for the Advanced Ventilatory Workshop in 2013 for the SgANZICS conference in Singapore.

In the field of clinical research, Dr Chew has published in a wide variety of arenas with international journals such as CHEST, Journal of Resuscitation, European Journal of Emergency Medicine and American Journal of Emergency Medicine featuring topics on cardiac arrhythmias, measurement of cardiac indices in critically ill patients, severe asthma and pneumothorax and has been involved in several local and regional clinical trials. He is also an invited reviewer for the Journal of Respirology and Singapore Medical Journal.